On April 4, 1968, James Early Ray murdered civil rights leader Dr. Martin Luther King, Jr. at the Lorraine Motel in Memphis. The city’s sanitation workers and public works employees were in the midst of a strike for fair living wages and safe working conditions. King was in Memphis to support this protest, and, on April 3, he gave his final speech–“I’ve Been to the Mountaintop”–at the Masonic Temple.

After King’s assassination, Tennesseans sent letters to the offices of Senator Albert Gore, Sr. and Representative Richard Fulton expressing a variety of views on the tragedy. This blog post will share samples of these responses

Some Tennesseans wrote Senator Gore asking him about the advancement of civil rights legislation to honor King’s life and legacy. Many specifically referenced the Civil Rights Act of 1968, also known as the Fair Housing Act. Tennessean Fred M. Harris wrote this letter to Gore at 11 o’clock the night of King’s assassination. Harris asked Gore to “assume a outspoken roll [sic] of leadership in the immediate passage of the current civil rights bill.” Click here to read the transcript of Harris’ letter. 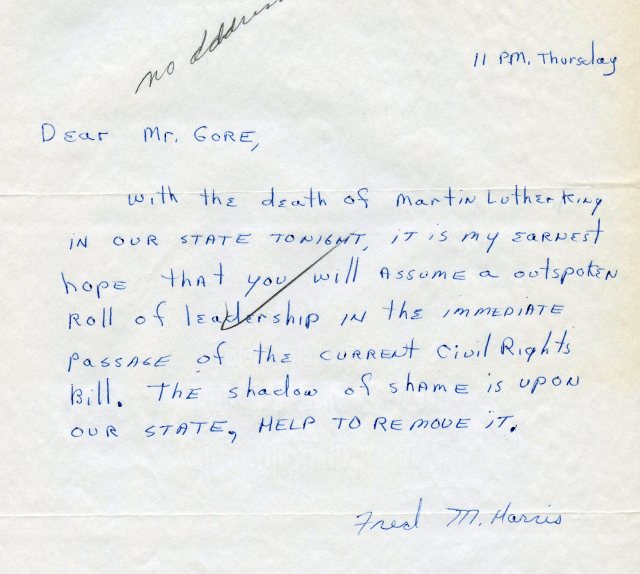 For some Tennesseans, the death of King prompted them to contact Senator Gore for the first time. Similarly, a few constituents mentioned watching the nightly news when civil rights leaders Roy Wilkins and Whitney Young urged White people, who believed in King’s message, to write their representatives about the passage of the Civil Rights Act of 1968. Click images to view larger. Click here for the transcript of these three letters. 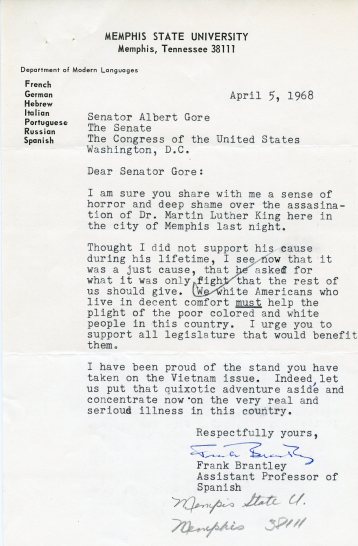 In their letters to Congress, some White citizens of Tennessee reflected upon their own role in perpetuating racial violence and inequality, mainly through their silence. In late February 1968, President Johnson’s National Advisory Commission on Civil Disorders released their final report on the causes for racial unrest in the United States. Often called the Kerner Report, it concluded that “our nation is moving toward two societies, one black, one white–separate and unequal.” The report stated “white racism” as the cause for such division and inequality. This letter from Mary Ann Leonard of Memphis demonstrated how one self-identified white moderate responded to King’s assassination. Leonard wrote, “I feel that I and many other moderate whites have contributed to the current conditions in Memphis and in the country by our silence when extremists of both races have spoken out….I am afraid that if moderate Americans of any race do not speak and act now, our country will be torn apart.” Click below to view her entire letter, and click here for a transcript. 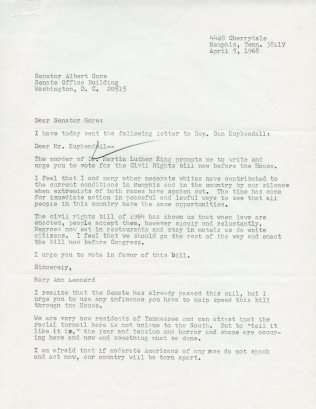 Senator Gore and Representative Fulton received hate-filled and racist letters, too. There were many constituents concerned about President Johnson’s order to lower the flag at half mast to honor King. Some called it hypocritical. Many thought King was undeserving of such a gesture because they blamed him for riots, looting, and violence. One White woman was so upset that she questioned whether or not she wanted to bring a child into a world that lowered a flag for “a controversial figure” like King. Gore simply replied that “the President, as Commander-in-Chief, has the authority to order the flag flown at half-staff.” Below are some examples of these responses. Click each letter to view it larger, and click here for the transcript of each letter. 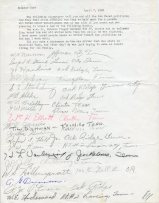 As weeks went on and April turned to May, Gore also received letters from constituents asking him to not make any emotional decisions about passing civil rights legislation. Constituents, on the other hand, rarely separated emotions and politics. Examining constituent mail to Senator Gore before, immediately after, and long after King’s assassination shows that emotions and politics constantly intertwined. Before the tragedy, a majority of the letters sent to Gore passionately directed him to vote against the open housing bill. Immediately following King’s death, letters poured into Gore’s offices and pleaded with him to lead the country in progressive civil rights measures. After a few weeks, constituent mail reverted back to asking Gore to be levelheaded in his voting record. 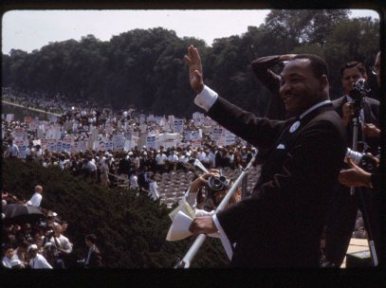 Emotional and tragic events–assassinations, school shootings, police brutality, etc.–prompt political discussions all the time, and sometimes lead to legislation. Although it was well on its way to passing, President Johnson signed the Fair Housing Act into law on April 11–one week after King’s assassination. Of course, constituents should be emotional about politics because the decisions being made at the local, state, and national levels directly affect all of our lives. But maybe we should also strive for being actively engaged year-round, instead of only contacting representatives after these emotional events occur.

The letters that struck me the most when researching how Tennesseans responded to King’s murder were those from people who admitted to writing to their congressman for the first time, or those White constituents who thought that if only they had spoken up earlier and more often, perhaps things would have been different.

As we reflect upon the life, the legacy, and the tragedy of Dr. Martin Luther King, Jr. this week (and every week), let us also reflect upon how each of us makes a difference in our communities, big or small.

Additional resources from the Gore Center on the 50th anniversary of King’s assassination: