Healthcare legislation seems to always create contentious debate among Members of Congress, the President of the United States, and the American people. During his time in Congress, Albert Gore, Sr. typically supported health care measures that served poor, rural, and elderly communities. His support for the passage of Medicare in 1965, along with his support for an expanded government role in the economy and social programs, placed him firmly in the realm of what some historians call southern liberalism.

Gore, and other southern liberals, believed that the U.S. government had a responsibility to the people to provide adequate health insurance, education, and other programs that guaranteed a good quality of life. Coming from a modest rural background himself, Gore knew firsthand the immense needs of underdeveloped and impoverished communities in Tennessee and similar areas across the South.

In November 1945, President Truman proposed a national health insurance program, partially a reaction to the 5 million men found unfit for military service during World War Two. Representative Gore, greatly moved by Truman’s call to action, dedicated one of his weekly WSM radio broadcasts to the need for national health insurance. In the broadcast, he gave an overview of the proposal and dismissed its opponents, like the American Medical Association, who deemed it “socialized medicine” and played off Americans’ fear of Communism. Gore cited this portion of Truman’s speech that demonstrated how patients and doctors would still have choices: 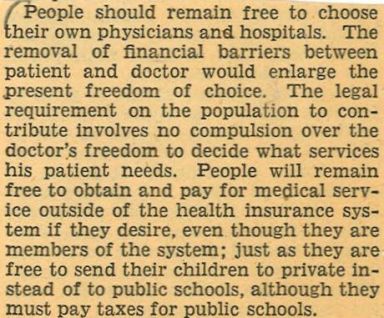 Gore mainly focused his broadcast on the unequal distribution of health care that poorer and rural communities faced, as seen in the excerpt below. (Read the full broadcast here.) 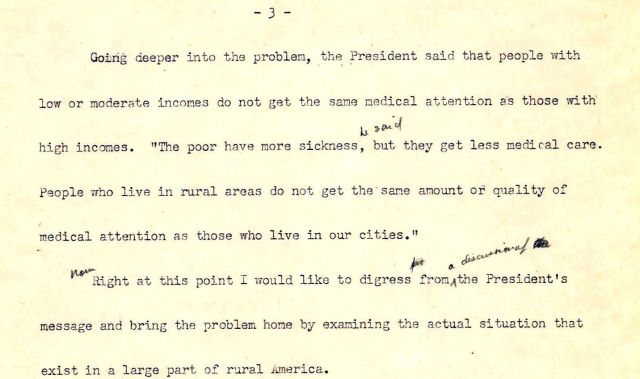 Gore went on to explain his own understandings of how difficult it was for many Tennesseans to access quality medical services and doctors. To strengthen his position, Gore read a letter to his radio listeners about a constituent living in Lafayette, Tennessee, a small town with a population of approximately 1,100 in 1950. In the letter, the constituent discussed his concern about Macon County only having three licensed physicians, all of whom were above the age of 65 and in poor health themselves. He stressed the need for a government-sponsored program to develop hospitals in areas like Macon County. He wrote, “Where is there a section in Tennessee with so large an area and in such plight for medical service?” 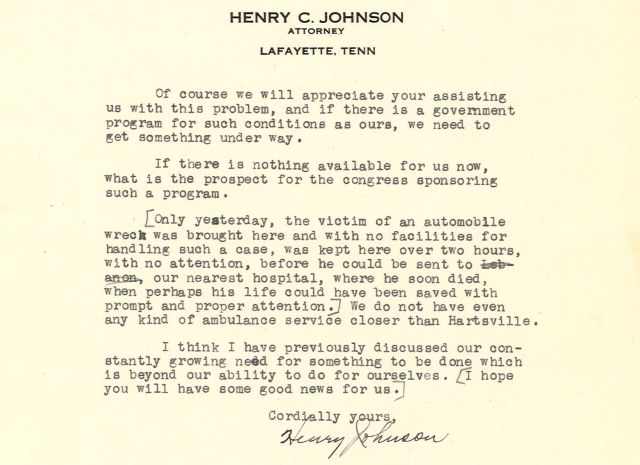 This question hit one of the three problems that Gore wanted to “attack vigorously.” He sought to increase the number and distribution of doctors in hospitals, strategically construct more adequate hospital facilities to reach a greater number of people, and bring medical, dental, surgical, and hospital care “within financial reach of everyone.”

In 1946, Congress passed the Hospital Survey and Construction Act (also known as the Hill-Burton Act). The law responded directly to the first of Truman’s five proposals by allocating funds to improve and construct hospitals. Gore fully supported the measure and fought for its success for years. He gave a speech to Congress on April 4, 1950 demanding restoration of the $75 million cut from the bill’s funds. He reiterated how these cuts would affect rural communities struggling to provide vital health care. He stated, “Efficient service to the patient–not politics–should be the ultimate goal of all hospitals, medical training, research and practice, prevention, diagnosis, and treatment.”

Did “patients not politics” extend to black people, as well, according to the Hill-Burton Act? Hospitals could not receive funding under the law if they discriminated based on race, color, national origin, or religion. However, “separate but equal” facilities were allowed. Below is a letter from Dr. W.S. Martin, the superintendent of a black hospital in Memphis, asking Gore if they qualified under the law.  In his response, Gore did not outright answer the question about building a new hospital for black patients in Memphis. Instead, he passed the buck to Tennessee’s Department of Health. According to some historians, though, the Hill-Burton Act “materially benefited black southerners as a group more than any other Roosevelt-era program” because it met “the South’s immediate health needs and provided a transitional infrastructure to promote the acceptance of black patients and health professionals into the mainstream health care system until integrationists achieved their goals in the mid-1960s.” [1] (Click the images to view larger.)

Letter to Gore from Dr. Martin, the superintendent of a black hospital in Memphis.

Letter to Gore from Dr. Martin, the superintendent of a black hospital in Memphis.

Letter to Dr. Martin from Gore.

The Hill-Burton Act was one direct result of Truman’s 1945 five-point proposal. The most ambitious and complete conversion of Truman’s call for a national health insurance program was the Social Security expansion bill introduced by Congressmen Robert Wagner (D-NY), James Murray (D-MT), and John Dingell (D-MI). The bill ultimately died after Republicans regained control of the Senate and the House in 1946. Although Truman failed to pass a national health insurance program during his presidency, Democrats like Gore continued the fight into the 1950s and ’60s.

Stay tuned to our blog and social media accounts for the story on the roles Gore and President Lyndon B. Johnson’s played in the passage of Medicare in 1965.

1 Response to Gore: Patients, Not Politics